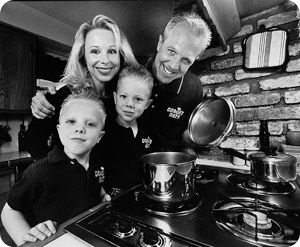 Lynn and Bonnie Rogers invented Coach’s Oats in their home kitchen in 1992. Lynn was the women’s gymnastics coach at California State University-Fullerton, where he was known by most as “Coach.” During his tenure there, he led the Titans to 7 Regional Championships, a National Championship and 66 All American awards.

That winter, they decided to make a special holiday breakfast for their friends. Coach and Bonnie loved steel cut oatmeal, but it took too long to cook, and rolled oats turned mushy and pasty. So they did what Coach always taught his athletes to do: They went back to basics.

Coach and Bonnie experimented by grinding, sifting and cooking whole oats called groats. After a lot of hard work, they tried something new. They put the oats into the oven before grinding them and … magic! The oatmeal was textured, nutty and flavorful. It didn’t become soggy or pasty, and it took only a few minutes to cook.

The Rogers’ family and friends loved the oatmeal, which quickly earned the nickname Coach’s Oats, and before long, Coach and Bonnie were grinding oats all weekend just to fill their friends’ orders. One admiring friend introduced the oats to a representative from Roman Meal Milling Company, and in 1996 Coach patented their oatmeal and Roman Meal began milling Coach’s Oats.

Since those unassuming beginnings, Coach’s Oats has gained many fans throughout the United States and select international locations. Thanks to those fans, what started in the kitchen is now a healthy family owned business dedicated to making the best oatmeal ever.

In other words, the story of Coach’s Oats is simple: Oatmeal has been reinvented.